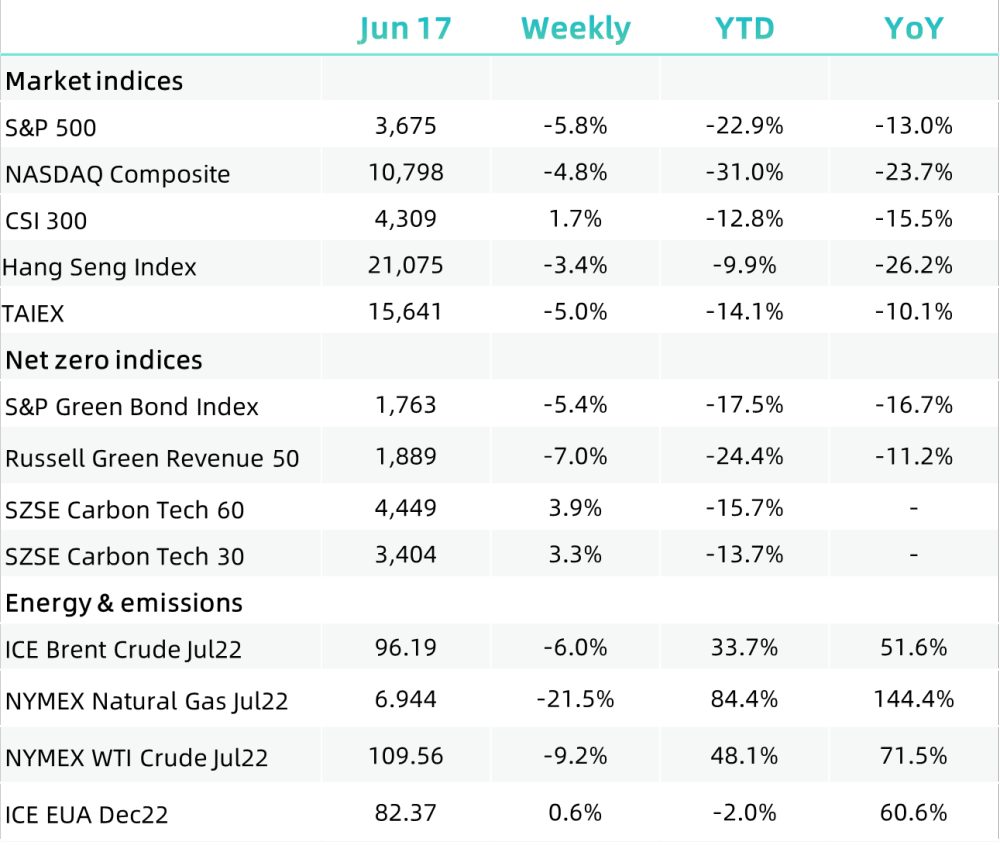 The Federal Reserve approved the largest interest-rate increase since 1994 and signaled it would continue lifting rates this year at the most rapid pace in decades to fight inflation that is running at a 40-year high.

Officials agreed to a 0.75-percentage-point rate increase at their two-day policy meeting that concluded Wednesday, which raised the Fed’s benchmark federal-funds rate to a range between 1.5% and 1.75% last Thursday.

New projections showed all 18 officials who participated in the meeting expect the Fed to raise rates to at least 3% this year, with at least half of all officials indicating the fed-funds rate might need to rise to around 3.375% this year.

The S&P 500 rose 54.51 points, or 1.5%, to 3789.99, snapping a five-day losing streak. U.S. government bonds rallied after sliding in recent weeks in a selloff that had pushed yields to their highest levels in more than a decade.

The country’s electricity usage in May dropped 1.3% from the same period a year ago to 671.6 gigawatt-hours, according to the National Energy Administration (NEA). In the same period of 2021, that figure jumped 12.5%.

Broken down by industrial sectors, power consumption in the secondary and tertiary sectors went down by 0.5% and 4.4% year-on-year respectively, while usage in the primary sector was up 6.3%, the NEA data showed. Residential consumption also declined by 2.4%.

Hillhouse has completed the funding raising for its upcoming fund based in Nanjing, China with RMB 4bn in total proceeds. The fund will focus on net-zero related technological innovations.

It is the first green-focused fund of Hillhouse. The fund has sought to involve eligible foreign investors under China's QFLP (Qualified Foreign Limited Partners) allowing them to invest in China's private equity. Nanjing, where the fund lands has published a governance guidelines of QFLP welcoming such funds to the emerging city.

BlackRock has launched an infrastructure strategy designed to take advantage of the ongoing transition to sustainable energy.

The strategy aims to offer investors access to inflation-linked returns from a portfolio of "perpetual" infrastructure core assets, while also creating growth in the real economy.

More than half of the strategy will be allocated to Europe initially, with a global focus becoming prominent "over the decades to come", with a range of open-ended vehicles planned for the second half of 2022.

The new fund will be chaired by Sir Ian Cheshire, former Kingfisher boss and chair of Channel 4, and bring together a board including climate scientists such as Professor Richard Templer (Imperial) and Professor Cameron Hepburn (Oxford) to help with its investment strategy.

The new fund will be initially launched with a portfolio of 25 start-ups that are already backed by Sky Ocean Ventures, a Sky venture fund launched in 2018, and will use the proceeds from the sale of paper bottle maker Choose Packaging in which Sky Ocean Ventures invested, when it was acquired by computer hardware company HP.

The Securities and Exchange Commission is investigating Goldman Sachs’ asset-management arm over its funds that aim to invest based on environmental, social and governance standards, according to the Wall Street Journal on June 10.

The SEC’s civil investigation is focused on Goldman’s mutual-funds business, the people said, and the firm manages at least four funds that have clean-energy or ESG in their names. The probe could end without formal enforcement action.

The SEC last year warned investors that it found some fund holdings “predominated” by companies with low ESG scores, despite the fund manager’s advertised commitment to picking companies that performed well on ESG screening tests.

It is the largest equity fundraising for a sustainability data SaaS company so far. The latest fundraising brings the company's total capital raised to USD 725m.

The state of California was recently able to produce virtually all of their energy needs from renewable sources for the first time ever.

In early April, the state achieved a new record at 97.6% renewable power, and on May 2 they were able to reach 99.9%. On May 8 the record was broken yet again, with 103% of the state’s power needs being met by renewables for a few hours.

Under the new partnership, TotalEnergies will acquire a 25% minority interest in Adani New Industries Ltd (ANIL). ANIL plans over USD 50bn in green hydrogen and associated ecosystem investments over the next 10 years and expects to develop 1 million ton per annum of green hydrogen production capacity before 2030.

NextEra Energy, the largest producer of electricity in the US, has announced the launch of Real Zero, a new sustainability goal to eliminate carbon emissions from its operations by 2045. With the plan going beyond net zero, achieving its emissions elimination without the use of carbon offsets, the new commitment is the most ambitious goal set by a U.S. energy provider, according to the company.

Gotion high-tech needs both the approval from Chinese and Swiss regulators to enact that listing.

China has mapped out a strategic plan to enhance its climate resilience, putting emphasis on both adaptation and mitigation in the face of global climate change.

The country will seek to build a climate-resilient society by 2035, with significant improvements in its ability to adapt to climate change, according to the national climate change adaptation strategy 2035 jointly released by 17 departments including the Ministry of Ecology and Environment (MEE) last week.

The 45 central banks and financial supervisors that make up the influential Basel Committee on Banking Supervision (BCBS) have published their finalised set of principles for managing and supervising climate-related financial risks. Approved last month, the principles are the first formal climate-related guidance issued by the global standard setter for the prudential regulation and supervision of banks.

Largely aligned with the recommendations of the Taskforce on Climate-related Financial Disclosures (TCFD), the BCBS principles are based on analytical reports and draft principles released last year and were informed by an extensive public consultation process. They form part of an ongoing BCBS assessment of potential climate-related measures covering disclosure, supervision and regulation.

The first 12 principles are aimed at banks and cover corporate governance, internal controls, risk assessment, management and reporting, capital and liquidity adequacy and other elements of risk management, including scenario analysis.

The remaining six principles focus on financial supervisors and regulators, outlining their duty to ensure that banks can “adequately identify, monitor and manage all material climate-related financial risks.”

The Partnership for Biodiversity Accounting Financials (PBAF) has published its new standard for financial institutions to measure the impact of loans and investments on biodiversity.

Spain's Santander named Hector Grisi as its new chief executive officer to oversee the bank's digital transformation and growth strategy through the global economic uncertainty that is rattling the whole industry.

Former investment banker Grisi, 55, who helped make the bank's U.S. business its most profitable last year, will take the helm from January 1 next year, replacing Jose Antonio Alvarez who has been in the role since 2015.

The bank's Executive Chairman Ana Botin said in a statement that Grisi's "track record as CEO of Santander Mexico and head of North America speaks for itself and illustrates why we believe he is the right person to lead the bank in the next phase of our transformation and growth."

Before joining Santander as CEO in Mexico in 2015, he spent 18 years at Credit Suisse, where he held a range of senior positions.

Deixonne, who has previously held roles at AXA IM and Societe Generale, joined Lyxor in 2012 and became head of its sustainable investment wing in 2014.

Investment services provider Partners Capital has appointed Michael Viehs as Global Head of Sustainable Investing. Viehs joins the firm from Federated Hermes, where he served as Head of ESG Integration.

In his new role, Viehs will be responsible for engaging with asset managers on ESG integration, working with clients to develop their sustainable investing policies, and further developing the company’s ESG reporting capabilities.

In his new role, Willis will be responsible for leading the strategy and the execution of Greystar’s global climate and sustainability efforts with respect to firm’s more than USD 50bn owned asset portfolio.