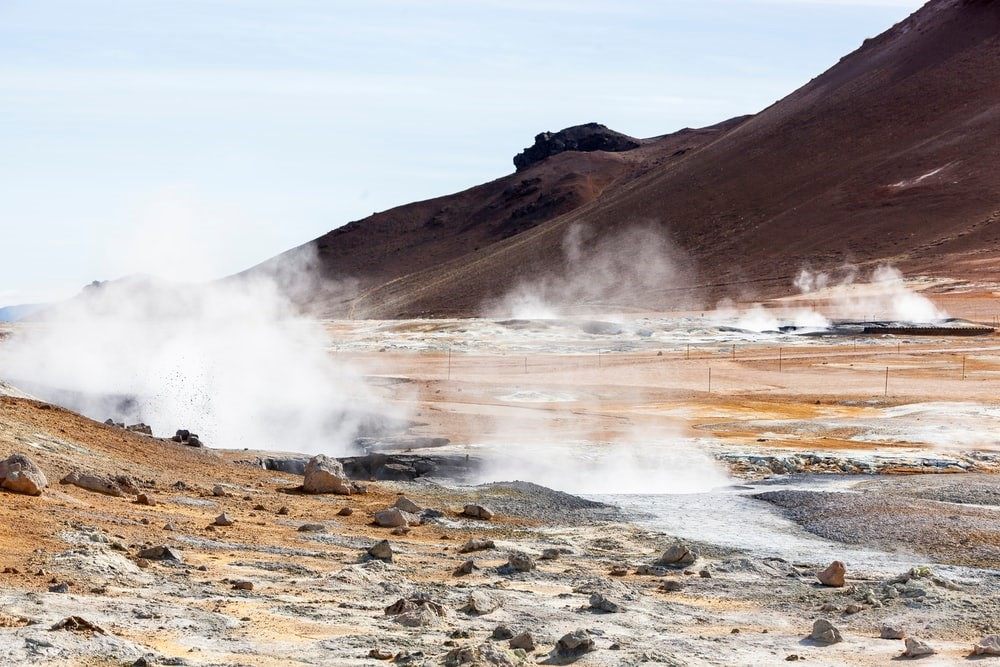 Geothermal energy, found in rocks and fluids beneath the earth crust, is one of the oldest sources of renewable energy.

Residing from the shallow surface to several kilometers or more below the earth's surface, geothermal energy could naturally rise to the surface through volcanoes and fumaroles (holes in the earth where volcanic gasses are released), hot springs, and geysers[1].

Geothermal resources could also be brought to the surface by drilling and capturing steam and high-temperature water, harnessed for energy applications through two primary pathways (similar to solar- and bioenergy), either through the generation of electricity or through various “direct-use” thermal applications (without conversion to electricity), such as space heating and industrial heat input.

Geothermal electricity generation was around 97 TWh in 2020, while direct useful thermal output was about 128 TWh (462 PJ). In some instances, geothermal plants produce both electricity and heat for thermal applications (co-generation), but this option depends on location-specific thermal demand coinciding with the geothermal resource[2].

Where can we find geothermal energy?

The most active geothermal resources are usually found along major tectonic plate boundaries where most volcanoes are located.  Geothermal power generation is currently deployed in more than 20 countries.

I. Geothermal Energy for Power Generation

An estimated 0.1 GW of new geothermal power generating capacity came online in 2020, bringing the global total to around 14.1 GW. The distinct feature of 2020 was the disproportionately small growth in capacity relative to recent years (attributable in part to pandemic-related disruption), with almost all new facilities located in Turkey. Other countries that added minor amounts of geothermal power capacity in 2020 were the United States and Japan.

US – Leader of the Pack in Geothermal Energy

The Geysers, located 72 miles north of San Francisco, California, is the world’s largest geothermal field and has been producing electricity since 1960.  With a complex of 18 geothermal power plants over 45 square miles, The Geysers has a combined installed capacity of 845 MW[4], meetings 60% of the power demand for coastal region between the Golden Gate Bridge and Oregon State line and providing half of all of California’s geothermal generation.  In 2019, The Geysers accounted for 20% of all renewable energy in California[5].

Another prominent user of geothermal energy is Iceland, home to more than 200 volcanoes and 600 hot springs. The small island nation of 360,000 residents holds 5% of the world’s installed geothermal capacity and powers 100% of its electricity production with renewable energy, with 73% coming from hydropower and 27% from geothermal power.  The country’s five geothermal power stations meet more than 90% of the country’s heating needs.

Iceland made the political decision to switch from fossil fuel to renewable energy for space heating during the oil crisis of the 1970s, making significant infrastructure investment for its energy security.  Aluminum smelters, which require a constant stream of energy, flocked to the island country in the 1990s.  Geothermal energy rose to the challenge to meet the explosive demand.  Between 1990 and 2014, Iceland’s geothermal electricity production increased 17 times, while the population grew only 25%[6].

The National Energy Authority estimates that in 2018 the economic benefits of using geothermal energy instead of oil for space heating was equivalent to 3.5% of Iceland’s GDP.  It is now set to become among the first nations to be free of fossil fuels and realize its goals of reducing carbon emissions by 55% by 2030 and achieving carbon neutrality by 2040[7].

II. Geothermal Energy for Direct Use[2]

China is both the largest user of geothermal heat (47% of the total) and the fastest growing market, with its installed capacity growing more than 18% annually on average during 2015 through 2019, and consumption growing more than 21% annually on average. That period of growth coincides with the government’s first geothermal industry plan, issued in 2017, for rapid expansion of geothermal energy use, especially for heat applications.

As of 2019, China had an estimated 14.2 TWh of installed geothermal capacity for direct use (excluding heat pumps), with 7 TWh allocated to district heating, 5.7 TWth serving bathing and swimming applications, and the rest used for food production and other industries. Most of China’s hydrothermal resources are relatively low enthalpy; of the 546 production wells drilled during the period 2015 through 2019, 94% had a wellhead temperature below 100°C.

Other top countries (Turkey, Iceland and Japan) have experienced more moderate capacity growth of around 3-4% annually (consumption growth of 3-5%). In Turkey, geothermal development is devoted mainly to electricity generation, while investment in direct use has contracted somewhat over the last decade. Iceland has significant thermal demand served by district heat networks and continues limited drilling of reinjection and make-up wells for those systems as well as for existing power plants.

In Japan, more than 80% of direct use is believed to be associated with bathing facilities located near geothermal springs, but due to limited data gathering, information is lacking on immediate prospects for further development. The remaining countries that rely on geothermal heat, each representing less than 3% of direct use, include (in descending order) New Zealand, Hungary, the Russian Federation, Italy, the United States and Brazil.

The cost of geothermal power generation is heavily skewed toward the front-end initial development cost rather than operating cost.  Drilling and pipeline construction are the first steps to building a geothermal power plant, followed by the actual design.

The initial cost of site development and plant construction for a geothermal power plant is approximately $3 - $5 million per MW installed[8]. Operation and maintenance costs range from $0.01 to $0.03 per kWh. Most geothermal power plants can operate at more than 90% availability/utilization (producing more than 90% of the time), though running at 97% or 98% availability increases maintenance costs[8].

Between 2007 and 2019, The levelized cost of electricity (LCOE) of geothermal power ranges from US$0.04/kWh for secondary development on existing sites to US$0.17/kWh for greenfield development in remote areas. According to IRENA’s estimates, the global weighted average LCOE rises from about $0.05/kWh for projects commissioned in 2010 to about $0.07/kWh in 2019[3].

Due to the rapidly declining trend of wind and solar LCOE in recent years, this figure is no longer advantageous among renewables, but this is still significantly better than the LCOE of wind and solar energy paired with energy storage system, which illustrates that geothermal power can provide competitive tariffs as a baseload power source in case high-quality heat source is available.

The current geothermal energy harvesting technologies are developing at different rates. Technologies for direct utilization of geothermal heat, such as district heating, geothermal heat pumps, are already widely implemented around the world.

In addition, a few emerging technologies are surfacing that allow sites and heat sources with more complex conditions to be harvested.

The implementation of distributed plants is made possible mainly by the screw expander as an alternative to the turbine. Screw expanders are characterized by lower power, typically 50KW-8MW; not bad efficiency 78-81% (vs. 80-83% for turbines); low heat source quality requirements, i.e. saturated steam is not required, liquid vapor mixture is fine as well; simple structure and low maintenance requirements in operation.

The lower power characteristic makes the wellhead model feasible (generally the power of a single wellhead is at the level of several MW). Thus, power plants can be built on one wellhead with modular installation. If profitable, subsequent distributed plant development can be done with sustainable cash flow from operating well, which effectively reduces development risks and initial capital expenditure[11].

Overlapping development with waste heat recovery: It is worth mentioning that, in terms of technical principles and engineering processes, harvesting medium and high temperature geothermal energy is quite similar to the utilization of waste heat in industrial and building sectors. These waste heat resources from factories and office buildings also usually exist in the form of high-temperature water and steam. The overlapping needs from the two markets could potentially drive faster development of the technology.

Industry Players from Japan, the US and China

In the field of high-temperature geothermal equipment, turbine manufacturers gain the upper hand, among which Japanese manufacturers dominate the share, including Mitsubishi Heavy Industries (7011.T), Toshiba (6502.T), and Fuji Electric (6504.T). In China, Harbin Electric (01133.HK) and Dongfang Electric (600875.SH) provide similar products to their domestic clients.  It is worth mentioning that the turbine itself has many applications and has a very large market, reaching US$ 20bn annual sales globally.

In terms of binary cycle power generation technology, Ormat (ORA) from the U.S. is the absolute leader. Originally established in Israel in 1965, Ormat has built more than 190 geothermal power plants so far, with a total installed capacity of more than 3,200MW, accounting for more than 70% of the market share.  Atlas Copco (Sweden), Turboden (Italy) and Exergy (Italy, subsidiary of Tica Group of China since 2019) are also players in the binary cycle power generation.

Kaishan Group Co (300257.SZ) is a strong Chinese competitor in the field of binary cycle power generation technology. The company’s proprietary screw expander is world-leading in mechanical performance, which helps the company’s business venture into the development of distributed wellhead power plants. According to public disclosure, Kaishan currently has 50MW of geothermal projects in operation and a reserved capacity of 540MW.

The technology in the field of enhanced geothermal systems (EGS) is still in the early stage of development, so the representative companies in this field are mainly start-ups, including Fervo, AltaRock. Ormat is also one of the companies actively promoting the development of EGS.

Some of them are closer to commercialization. Canadian startup Eavor develops a closed-loop system which is more deployable and flexible than traditional technologies. The company is scaling its demonstration facility in Alberta to a commercial scale plant. AltaRock, another US-based startup, focuses on the development of scalable EGS technology, and is initiating the development of First EGS plant in Oregon, U.S.

Riding on the Net Zero Future

As the global campaign for Net Zero is in full scale with mandated renewable energy targets in many locales, interest in geothermal energy is growing rapidly.  It is an essential component of the world’s green-energy future as it provides carbon-free heat and around-the-clock baseload power to compensate for the intermittency of wind and solar[13].

Because of the high initial development costs of accessing deep geothermal energy, government support is generally seen as a necessary ingredient for the success.  Geothermal output in Europe could increase eight-fold by 2050 by IRENA estimate and geothermal energy could generating electricity could increase 26-fold by 2050, providing 8.5 percent of the United States’ electricity, as well as direct heat.  It is destined to play a larger role, coupled with other renewable technologies on the path to a net zero future[13].

[6] WORLAND/REYKJAVIK J. A Solution to Our Clean Energy Problem May Lie Right Beneath Our Feet [J/OL] 2017, https://time.com/4844086/geothermal-energy-iceland-deep-drilling-project/.