The deadly Coronavirus is attacking the mecca of manufacturing. China, is at the centre of most of the world’s production needs. But as the country continues to grapple with containing the contagion, production lines remain quiet as factories remain shut, with millions of workers either displaced or restricted in movement.

More than 20 provinces in China have ordered businesses not to resume work before Feb 10 at the earliest. Some have even told companies to remain in lock down till March. Hubei, once known as the birthplace of modern industry in China but now the epicenter of the outbreak, has remained in complete lock down, and work resumption has been pushed to after March 10th.

As production faces the pinch, which industries are set to buckle under the pressure of insufficient manpower and poor logistics? MioTech deep dives into the supply chain network of various industries to find out the business victims of Covid-19.

MioTech first finds that there are 107 listed companies in the epicenter of the outbreak, Hubei Province. The top 4 industries they belong to are: 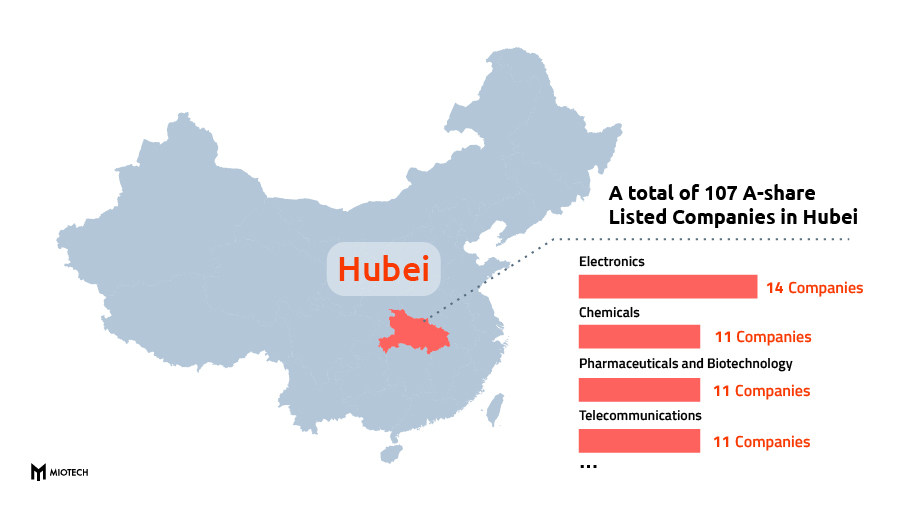 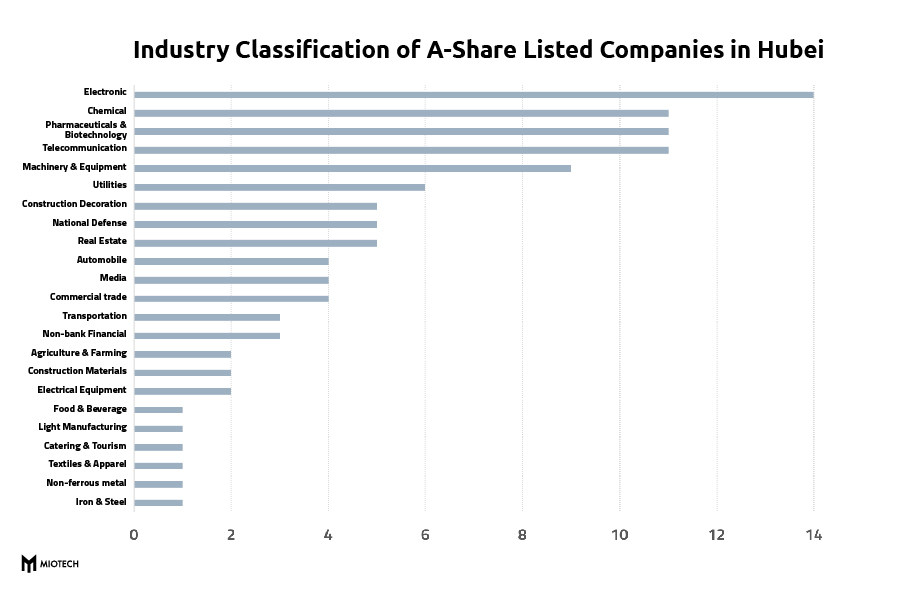 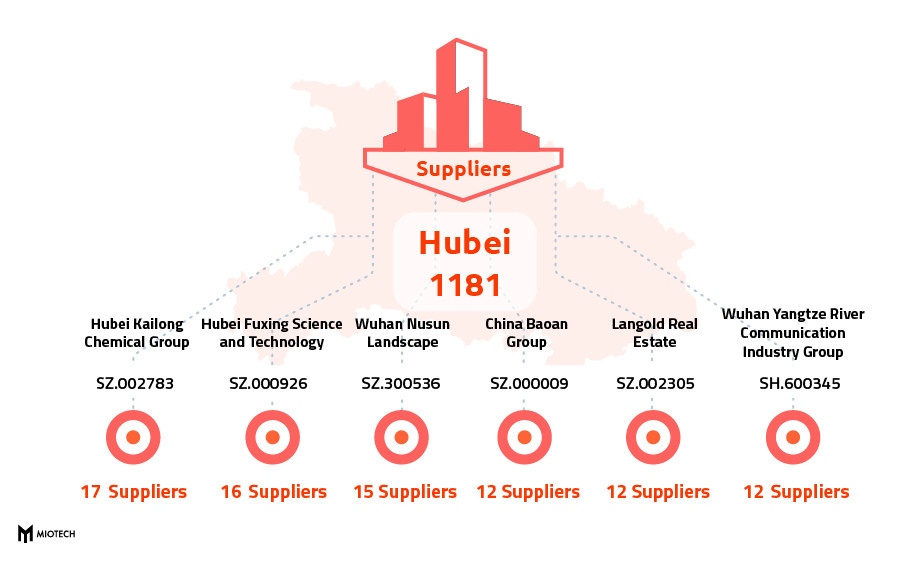 The A-Share suppliers in Hubei are very concentrated in manufacturing, which accounts for 38% of all industries. 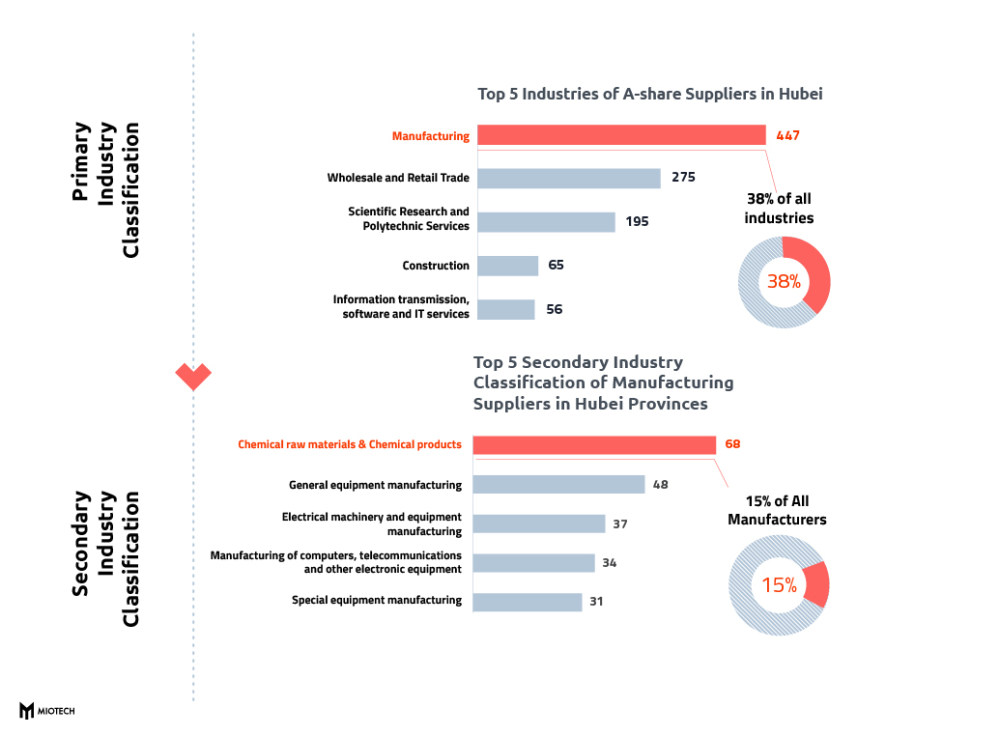 The companies producing chemical raw material in Hubei Province are concentrated in producing phosphate rock, monoammonium phosphate, diammonium phosphate, paraquat, and glyphosate. But with insuﬃcient output caused by the outbreak, and declining prices due to weakened demand, these enterprises will be under heavy operational risks. 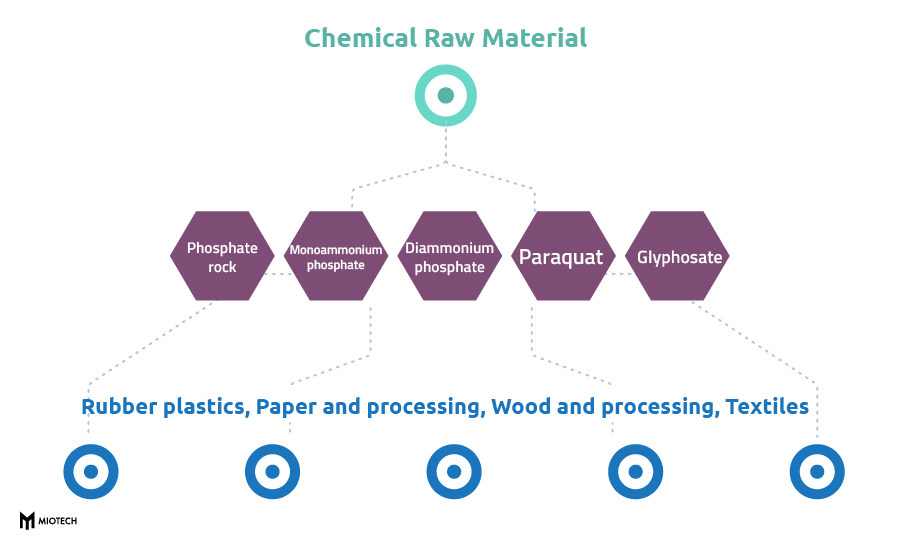 MioTech further expands the statistical scope and looks into the five provinces with the highest number of confirmed cases - Hubei, Zhejiang, Guangdong, Henan and Hunan to observe which part of the supply chains are impacted the most by the epidemic. 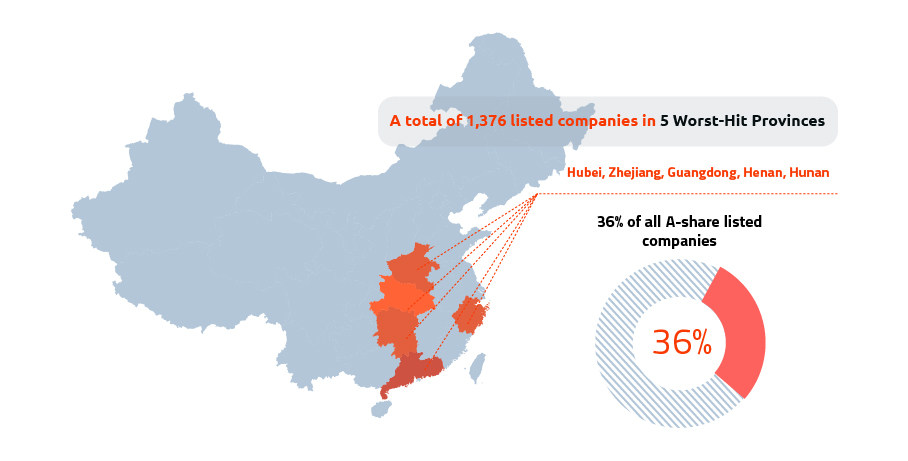 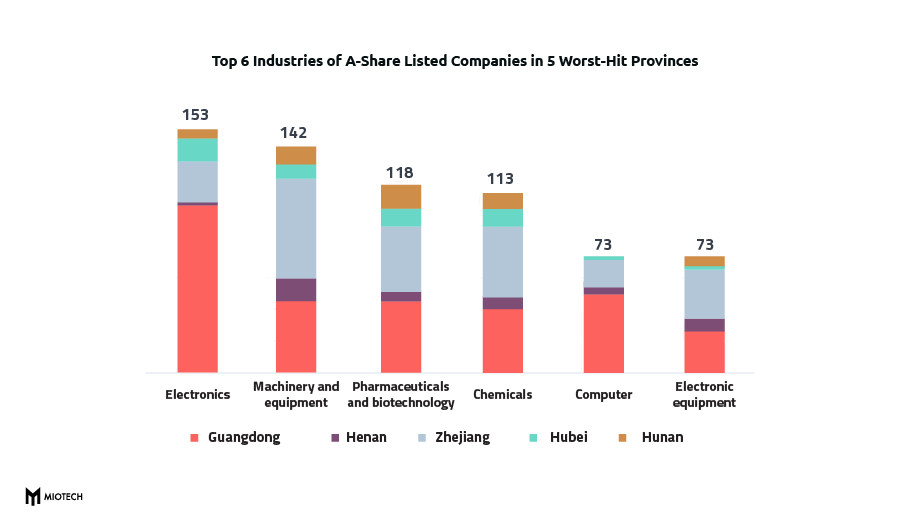 From a supply chain angle, these 5 provinces also have a total of 12,716 suppliers to A-share listed companies.

To classify these suppliers by industry:

47% of the suppliers are in the manufacturing industry. 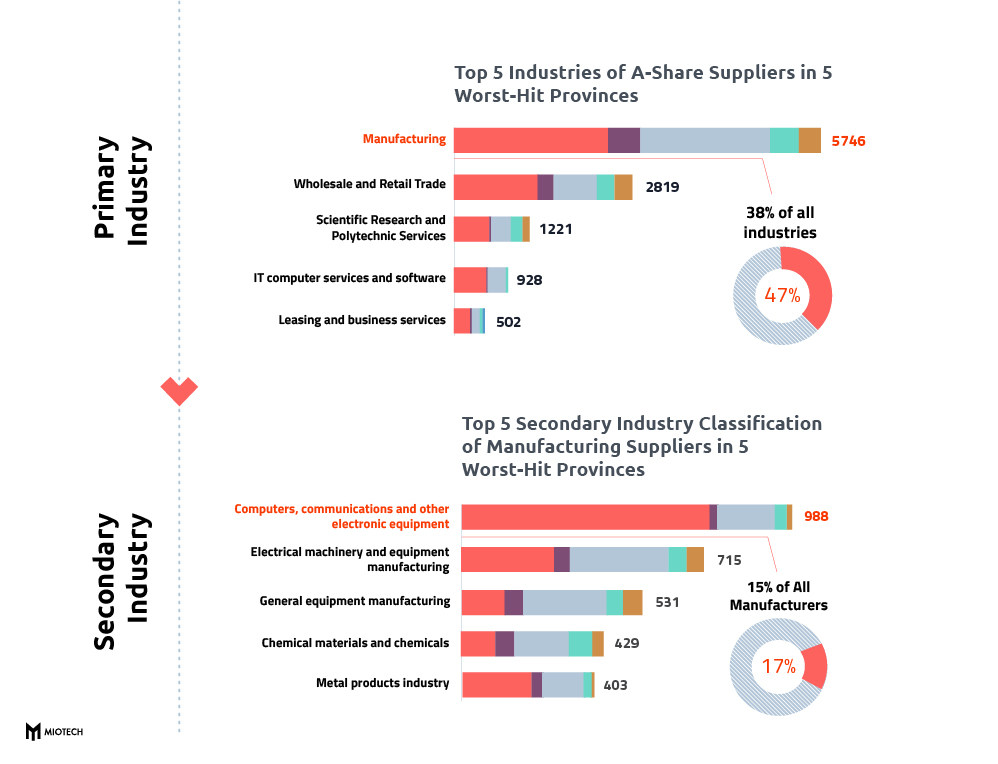 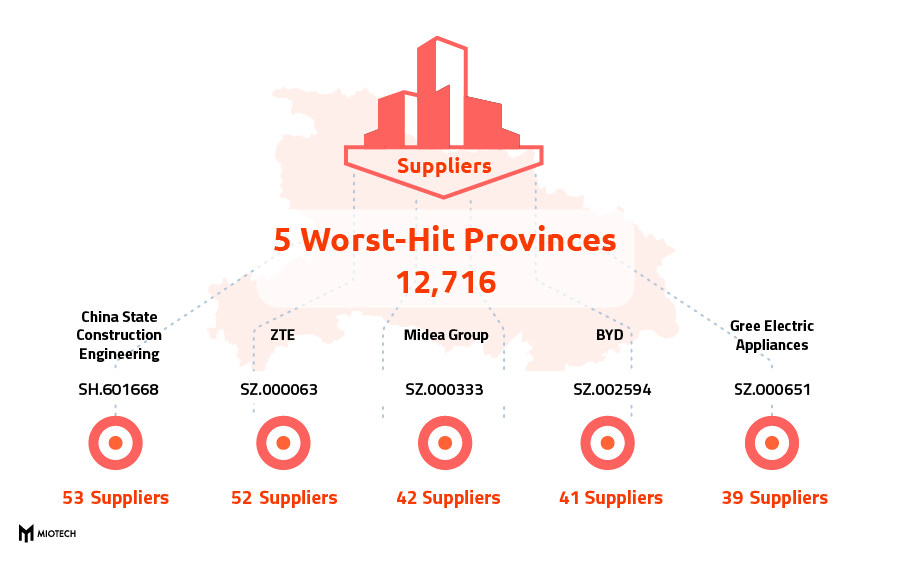 Falling under manufacturing, are the heavily concentrated suppliers in computers, communications and other electronic equipment, with a total of 988 or 17% of all manufacturers. It is without doubt that factories and equipment will be underutilized if manufacturers fail to resume work. At the same time, due to transportation disruptions and upstream under production, companies would even struggle more on supply chain butterfly effects.

It’s also important to note that the top five virus worst-hit provinces are major players in labor export and import. With restricted travel and limited mobility for employees to report to work, this brings deeper impacts on a labor-intensive consumer electronics industry.

Wuhan, the capital of the Hubei province and the ground zero of the outbreak, also happens to be a key player in China’s manufacturing supply chain, with a large industrial cluster in electronics, chemicals, automobile and pharmaceuticals.

Wuhan has dubbed itself as China’s “Optics Valley.” It is home to the world’s largest fiber optics production, accounting for 2/3 of the domestic market and 1/4 of the global market. Its domestic market share of optoelectronic devices and optical transmission equipment is 60% and 10% respectively.

Taking Wuhan-based Fiberhome Telecommunication Technology (SZ.600498) as an example, optical communication equipment accounts for 62% of the entire operating income. It is worth noting that its upstream industries, such as semiconductor integration and transportation systems, may have been affected to a similar extent as well.

According to media reports, Fiberhome stated that in the face of the epidemic, the company has quickly set up a big data support emergency working group to bring employees from all regions safely back to work. It also utilises relevant technology to provide service support for epidemic prevention and control. However, a specific date for employees to resume work has not yet been determined. 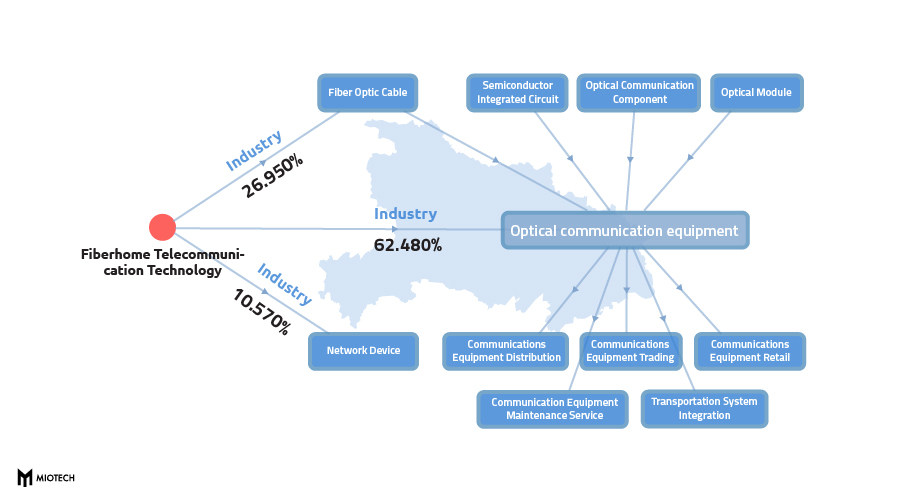 Automobile - Covid-19 A Big Test to The Industry

Supply chain risks associated with the automotive industry are mainly due to production delays, labor shortages and disruption in the transportation of components to manufacturers.

According to analysts, while factories across China are getting back into gear and restarting operations, the hit to supply chain and sales could take months to recover from.

China’s association of automobile manufacturers last week just re-forecasted its 2020 projections, expecting a 10% drop in sales for the first half of the year and 5% for the full year.

The automobile industry is particularly hard hit as Wuhan is known as the “Motor City” in China. It is the major production hub for the Chinese auto industry, especially foreign manufacturers such as Nissan, Kia, Peugeot, and Honda.

In 2018, Wuhan produced a total of 1.7 million passenger cars and the total output value of the automobile industry reached 320 billion yuan. In the first half of 2019, the city's five largest passenger vehicle manufacturers produced a total of 763,200 vehicles, and completed a total industrial output value of 94.065 billion yuan. The automobile industry contributed more than 20% of Wuhan's GDP in 2018, becoming the single industry with the largest share of GDP in Wuhan.

Wuhan Economic and Technological Development Zone is the most densely populated region of automobile factories in the world. This is the headquarters of Dongfeng Motor (SH.600006) and its subsidiary Dongfeng Passenger Cars, Dongfeng New Energy, Dongfeng Honda, Dongfeng Renault, Dongfeng Fengshen, as well as other automobile companies such as Shenlong Motor and Geely. Vehicle production and sales reached 2 million vehicles in this zone. Before the outbreak, more than 5,000 vehicles rolled oﬀ the production line in Wuhan every day.

Moreover, Wuhan is also one of the regions with the most concentrated number of automobile parts producers in China. It has more than 500 automobile parts enterprises, whose products cover gearbox, chassis, body, electronics, interior, glass, etc.. There are also 14 provincial-level automobile research and development institutions such as Dongfeng, Valeo, and Cummins etc.

In 2019, three of China's top ten auto manufacturers have factories in Wuhan, including SAIC-GM, Geely Holding and Dongfeng Honda. In addition, Dongfeng Nissan has been approved to set up a new factory in Wuhan in August 2018 and it will be oﬃcially up and running in 2023. 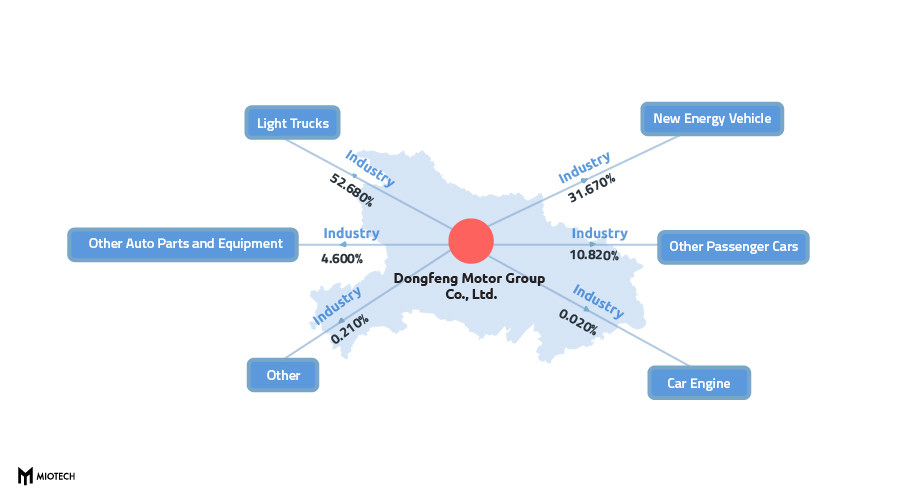 Outside of Wuhan, there is Dongfeng Nissan (including Infiniti) in Xiangyang, Dongfeng Xiaokan in Shiyan, and Trumpchi in Yichang, all of which have yet to determine when employees can go back to work.

According to our research, some international automakers with major production facilities in China have announced they will resume work in the next few weeks.

While production seems to be headed back on track, production schedules of carmakers have already been delayed by a week or more, which means added pressure for automakers to increase output in an increasingly competitive industry, especially from out of the region.

Impacts on the Global Supply Chain

Economists and analysts alike are pouring over charts and data to gauge just how bad the hit of this virus will have on the global economy.

Often compared to SARS which had an impact on tourism and exports, the Covid-19 makes it difficult to make a fair comparison since China only accounted for 4% of the global GDP back in 2003.

The coronavirus is likely to have a much greater impact on economies and markets today than SARS because China's GDP is a much bigger part of the global economy than it was 17 years ago.

According to the National Bureau of Statistics in China, the country’s GDP is expected to account for more than 16% of the world's total in 2019, and China's economic growth will contribute about 30% to global growth.

China's supply chain is deeply embedded in the global system, with nearly every major technology company making products in China, including iPhones, game consoles, and about half of the world's LCD panels. In addition to the direct impact of listed companies in Hubei province and related suppliers as analyzed above, such tech companies have begun to feel the burn from the economic turbulence the virus is causing.

In addition, we have observed through the analysis of this outbreak that supply chain concentration is also an important measure of a company's health condition. Companies that only rely on a limited number suppliers at only a handful of locations are far more vulnerable.

Supply Chain management is an influential factor when we measure companies’ social responsibilities as well as financial performance.