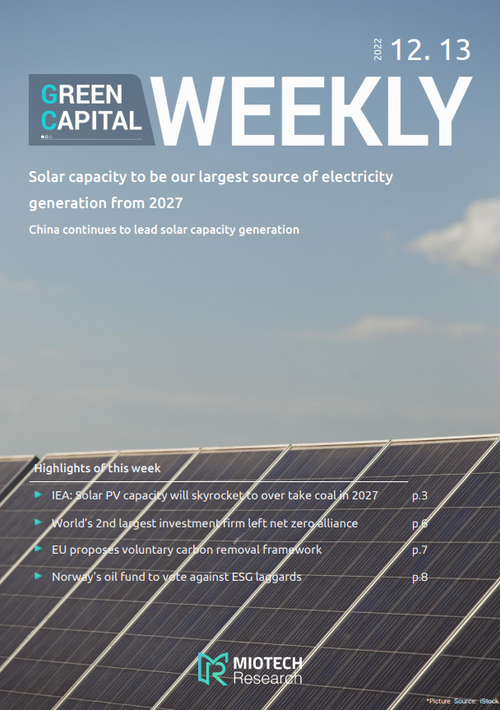 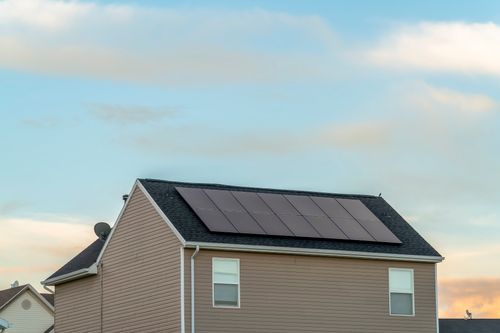 Despite current higher investment costs due to elevated commodity prices, utility-scale solar PV is the least costly option for new electricity generation in a significant majority of countries worldwide.

The International Energy Agency has given its opinions of the development trends of renewables and growth forecasts to 2027 with the publication of its flagship report “Renewables 2022”. Solar photovoltaic, or solar PV is expected to overtake natural gas, and most importantly, coal by 2027 in terms of worldwide capacity, and become the largest of all technologies. Although solar PV and wind power have very close capacity volumes now, the lower costs of solar power will make it more favourable relative to wind in the future.

As solar PV and wind to deliver sound growth, the capacity of biofuels will also see a gradual, but much smaller growth over the years. The growth of traditional technologies like coal, natural gas and hydropower will slow, with coal capacity beginning to decline in a few years.

As growth pattern differs for each technology, solar PV is seen to exceed hydropower in power capacity in 2024, natural gas in 2026, and coal in 2027.

Despite current higher investment costs due to elevated commodity prices, utility-scale solar PV is the least costly option for new electricity generation in a significant majority of countries worldwide, the IEA said.

Distributed solar PV, including rooftop solar is undergoing a faster rollout for its benefits to save consumers’ expenses on energy bills. 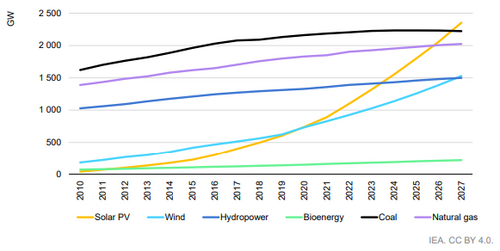 Renewables combined will account for nearly 40% of global electricity in 2027, marking a 60% growth over the years, when coal, natural gas and nuclear decline in shares.

The country is likely to reach its 2030 target of 1 200 GW of total wind and solar PV capacity five years in advance. Notably, solar PV is predicted to surpass hydropower, China’s current largest renewable power in capacity, only next year (2023).

The IEA moved up its forecasts for China’s total renewables capacity by 35%, thanks to the country’s demonstrated solidity for renewables from its 14th Five-year Plan on Renewable Energy, published this June.

US: Consequential support for renewables from Biden administration

“Inflation Reduction Act incentives provide unprecedented policy certainty, boosting wind and PV deployment”, the IEA concluded on the US renewables outlook. The Paris-based global organisation estimates the US will see a 74% growth in domestic renewables capacity from 2022 to 2027, almost all of which will be wind and solar power.

The enaction of Inflation Reduction Act has driven the IEA to revise its US forecast with a 25% upward change. The act, signed by President Biden into effect this August, includes a USD 370bn climate package offered in direct financing and tax credits. IRA incentives are expected to support the Biden Administration target of 100% carbon-pollution-free electricity by 2035, the IEA said.

Apart from federal strategies, 37 out of 50 US states have renewable portfolio standards and goals supporting expansion, the IEA added.

Chart: IEA forecasts for the US

However, in the near term, the outlook is not as cheerful. US renewables capacity’s annual additions will drop by over 20% this year compared to last year, over rising costs and supply chain disruptions. The US launched an anti-competitive investigation into solar panels exported from Southeast Asian countries this March, which, despite being suspended with a tariff exemption in June, has caused changes in the decision-making of market participants and progressing of projects. US actions on exports from Xinjiang, China have also led to delayed deliveries of PV products.

Renewables capacity amounting to 425GW will be installed in Europe from 2022 to 2027, mostly being solar PV, growing the total capacity by 60%. The IEA has increased its forecast for Europe by 30% due to the measures proposed by the European Commission and EU member states, with long-term renewable energy targets and competitive auctions for utility-scale projects serving as main drivers.

In the Fit for 55 climate policies package, released last year, the bloc has raised its renewable energy share target from 32% to at least 40% by 2030, while the final target is still under negotiation. This year, the REPowerEU strategy has targeted the share of renewables in final energy consumption to reach 45% by 2030, from the current target of 40%. Meeting this target will require around 600GW of solar PV and 510GW of wind capacity by 2030, the IEA suggests.

While countries like the US and India are ramping up their investments in the solar PV value chain, China’s estimated USD 90bn of investments spanning across the forecast period, more than triple that by the rest of the world combined, will keep China the leader in this area.

China’s share in global manufacturing capacity could decrease slightly, from 80 - 95% today to 75 - 90%, depending on the manufacturing segment, the IEA said. If other countries continue to enforce trade protection and incentivise domestic products, China’s share might fall to 60 - 75% by 2027.

Vanguard, one of the world’s largest investment firms, has announced to withdraw from the Net Zero Asset Managers initiative.

The firm, with more than USD 8tr of assets under management, said: “Such industry initiatives can advance constructive dialogue, but sometimes they can also result in confusion about the views of individual investment firms.”.

As 80% of its assets are invested in market indexes, the investor was concerned about how to adopt net zero approaches to the broadly diversified index funds.

The NZAM is one of the sector-specific alliances under the Glasgow Financial Alliance for Net Zero (GFANZ). This move marks that Vanguard has left the GFANZ, spearheaded by Michael R. Bloomberg and Mark Carney. Some US banks, among other financial institutions have previously expressed their worries about the potential legal and compliance risks arising from the membership in a net zero financial alliance.

The New York City comptroller Brad Lander said Vanguard’s decision to leave the NZAM was “a misguided about-face at a time when financial institutions need to be taking a strong, collective approach to addressing financial risks from climate change”. 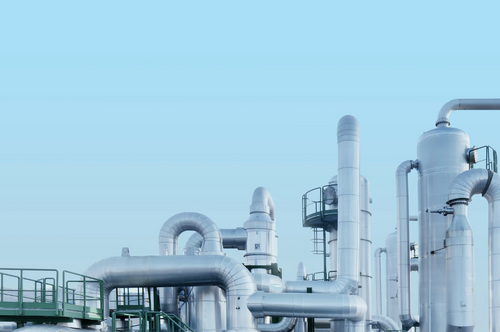 Despite the effort to boost carbon removal, this proposal was criticised by environmental groups as they fear this framework will become yet another greenwashing mechanism, allowing polluters to create an “environment-friendly” facade, while not putting forward any concrete action to reduce greenhouse gas emissions. Green groups also questioned the feasibility of the large-scale carbon storage technologies, which are not yet proven to work. Stakeholders challenged that this proposal is taking a big bet on unproven technology.

The EU has included several criteria to ensure the quality of the certified carbon removals. The four key criteria are abbreviated as QU.A.L.ITY, which stands for “Quantification”, “Additionality”, “Long-term storage” and “Sustainability”. These criteria safeguard the accuracy and legitimacy of carbon removals, the EU said.

AXA IM, BNP Paribas AM, and Robeco have joined an investors group to co-launch a biodiversity initiative at the recent United Nations Convention on Biological Diversity (COP15).

The investors said in the launch statement that with USD 44tr of economic value generation – more than half of global GDP – reliant on nature’s services, and tens of billions of dollars potentially at risk over the next five to ten years from the continued production of deforestation-linked commodities.

The investors will focus on some key sectors they identified as systemically important to the goal of reversing nature and biodiversity loss by 2030, and make a list of 100 companies for engagement.

The global largest sovereign fund, Norway’s oil fund with USD 1.3tr in total fund assets, will take a harder stance on issues like corporate climate change actions, executive pay and board diversity, and aims to be a more contrarian and long-term investor.

The fund has planned to vote against companies that fail to set a net zero emissions target, overpay their top leaders, or do not have sufficiently diverse boards, the Financial Times reported. “Yes, we can be [more vocal] and I think we will be…we can vote more against the companies where we have different expectations about how they behave,” Nicolai Tangen, the fund’s chief executive said in a recent event in London.

Around one third of the fund’s more than 9,000 invested companies now have a target to reach net zero emissions, Tangen said.

He also fired bullets at executive remuneration, alleging it is “unhealthy” that an average US top executive is paid close to USD 15m at a time of the cost-of-living crisis.

He added that the reason why US investors were reluctant to engage companies regarding executive pay is that their own top managers were also overpaid.