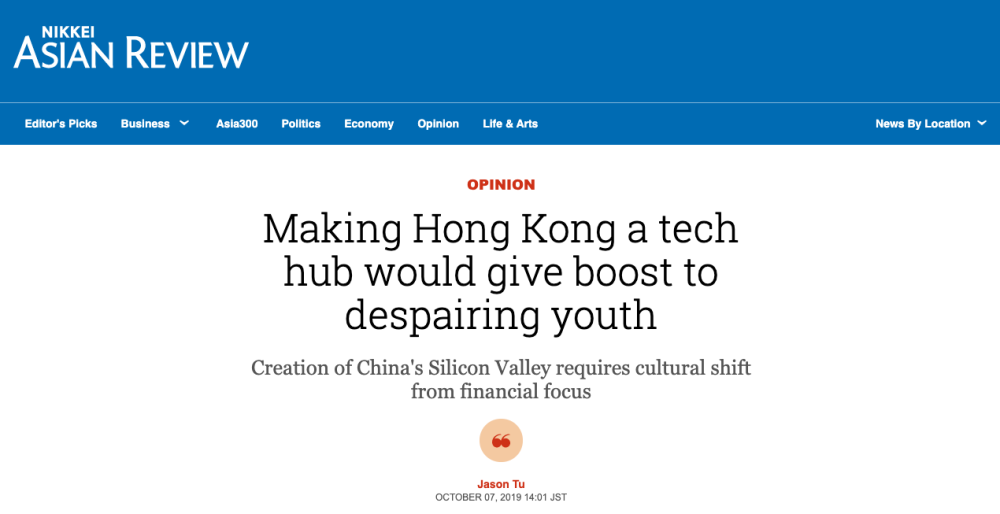 Three years ago, I left Silicon Valley for Hong Kong after deciding the former British colony would be the best base for my artificial intelligence startup.

The Chinese government aspires to turn the region anchored by Hong Kong, the neighboring city of Shenzhen and provincial capital Guangzhou into its own Silicon Valley under the banner of the "Greater Bay Area."

This vision, promoted heavily this past spring, feels very remote after the past four months of anti-government demonstrations in Hong Kong. The cultural and psychological distance between the mainland and Hong Kong has widened in every way and at the same time, Hong Kong itself is more politically divided than it has been in half a century.

Young people especially feel even more alienated than before from their northern brethren. What is needed is an uplifting vision for Hong Kong's youth, who feel hopeless about their opportunities for career success.

The original government-led Greater Bay plan for a Chinese Silicon Valley understandably did not capture the imagination of the city's youth. What is needed is far more than just a change of government policy.

Indeed, the region already has the infrastructure, the talent and the diversity that nourished the original Silicon Valley. What is lacking is the cultural environment for entrepreneurs to set up operations and hire the right talent.

In this area, labor mobility is still more an idea than a reality. In California, I used to commute south by train from San Francisco along the bay to Palo Alto. Many of my co-workers lived on the east side of the bay because of its more affordable housing.

By contrast, the notion of commuting daily between Greater Bay cities, especially from Hong Kong, is almost unthinkable despite recent infrastructure improvements. It has always been hard to find talented young staff in Hong Kong open to exploring the tech landscape just a few kilometers north across the border.

This is partly due to Hong Kong's obsession with finance. Having worked in a bank in Hong Kong myself as my first job out of college before switching to a tech venture, I always try to encourage young people to explore new things in fast-paced startups.

Unfortunately, all the interns my company hosted during the summers of 2017 and 2018 chose to join investment banks in the city after graduation. Our local intern this summer also has his sights set on joining a hedge fund.

Similarly, when participating in career fairs at local universities, we have been treated as second-class citizens. When opening up bank accounts, we were regarded as suspicious as we had no existing bank statements to show.

Government policies to promote entrepreneurship can only do so much if society is distracted with political cynicism, celebrity gossip and the latest doings of the city's financial and real estate tycoons. Culture is much harder to create than policies. The Greater Bay can become the Silicon Valley of the East only if it can learn the essence of Silicon Valley culture.

Diversity is another crucial part of Silicon Valley's success. A large number of unicorns in the Valley were started by immigrants. South African-born Elon Musk and Russian native Sergey Brin, co-founder of Google, have for example become spiritual leaders in Silicon Valley.

Hong Kong and San Francisco are home to similar populations of expatriates, at around 600,000 each. But much as the U.S. environment has turned decidedly unwelcoming for many of the foreign-born, there has been little talk so far of international companies or of foreign talent having a key role to play in plans for the Greater Bay.

Global access and diversity could make Hong Kong a crown jewel of the Greater Bay as the global access point for Chinese technology and for foreign technology making its way into China.

Silicon Valley's culture is built on inspiring entrepreneurial role models, like that of Musk and Steve Jobs. In theory, their examples should be more relevant to aspiring Hong Kong youth than the life stories of the old local tycoons who made their fortunes in property and still dominate headlines.

An innovative spirit and culture are necessities for a city of innovation. To replicate Silicon Valley's success, Hong Kong needs its government, businesses, schools, media and ordinary citizens to work together to establish an entrepreneurial culture that is diverse, curious and inclusive.