In this report, we study prominent stock exchanges on listing rules, stock performances and capital raised to help you decide if location matters when investing in IPOs.

As we come to the tail end of the year, the market for initial public offerings are dragging themselves towards the finish line. If the year had ended in September, it would have been a blockbuster year for IPOs. But October came along and the stock market plummeted. Companies that stuck to listing in November have only seen a 0.2% rise in shares, which marks the weakest market reception of IPOs since November 2016. IPO activity fell by 66% in the last two months of this year compared with 2017. 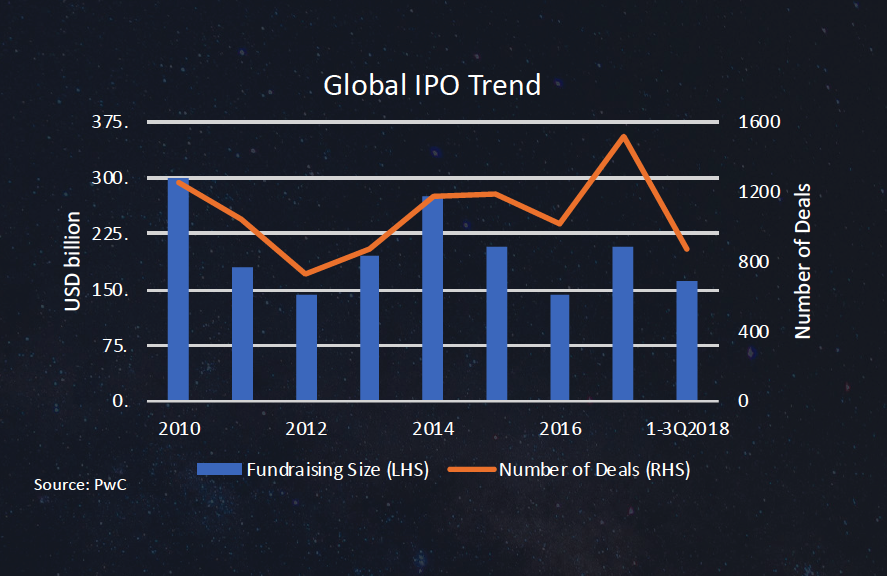 As of November 2018, 48 IPOs announced withdrawal, double than the 25 deals that pulled out in the same period last year. Additionally, in light of global uncertainties such as Brexit and US-Sino trade war, big companies like Tencent Music and Volvo have delayed their listing, waiting for market sentiment to turn around in order to secure their targeted IPO price. But for patient investors, this gloomy stock market could present an opportunity. For head start into potential market rebound in 2019, let’s study some of the prominent stock exchanges, their listing rules, stock performances and capital raised to see which IPO locations are worth keeping an eye on.

Recently, many companies have chosen to go abroad to IPO rather than seeking public funding from their own country. For the first three quarters of 2018, 9% of APAC issuers go IPO in the overseas stock exchange. E-Commerce giant, Alibaba, had forgone their listing plans in Hong Kong and decided instead, to go public in United States. One of the reasons could be attributed to the laxed listing requirements in their domestic stock exchange, especially for startups. 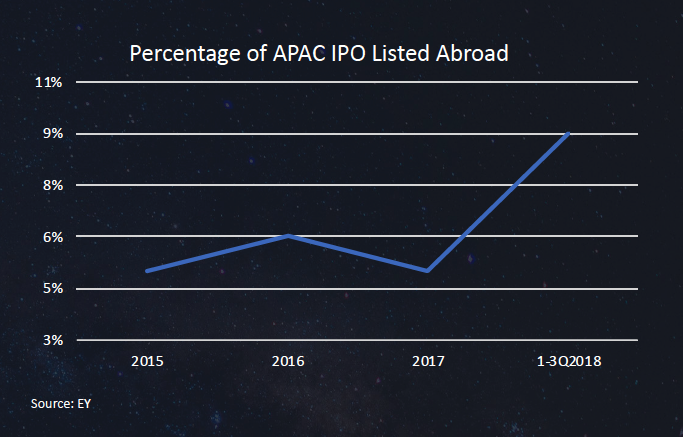 This trend can also be affirmed through the active steps global stock exchanges have taken to revise their listing rules in order to remain competitive in the IPO market, especially to accommodate young, fast rising startups. From our study, we found that NYSE and NASDAQ have more comprehensive considerations and a greater acceptance towards companies in their early stages. For stock exchanges in the U.S and Hong Kong, out of all the financial requirements such as cash flow, earnings, capitalizations etc., applicants only need to meet one of the criterias. Due to less stringent rules, HK, US and China have been the top 3 IPO markets for the last few years.

From an investor perspective, it is worthy to see the track record of IPOs in different stock exchanges. IPOs listed on Shanghai or Shenzhen stock exchange had an extraordinary return on the first trading day and since IPO, with 44% and 58% respectively. Diving deeper, we tracked recently listed tech stocks in US, HK and China in 2018. We found that Hong Kong and U.S. both posed a lower return compared to the first-day return. However, those that adopted the buy-and-hold strategy in China, tech IPOs yielded an average return of 110%.

If an investor were to sell the IPO on the first trading day, the strategy yields positive returns in most cases in the U.S. and China, no matter if the IPO was listed before or after trade-war. What’s surprising is that selling China-listed tech IPOs on the first-trading day guarantees at least 20% return. But it is important to be aware of the risks involved in investing in China IPOs. According to our findings, we believe the speculative IPO market in China relates to the high participation rate of retail investors who on one hand is hungry for short-term profits but on the other, have limited knowledge about value-investment.

Overall, 2018 has been a strong year for IPOs. But coming into 2019, especially after 2 months of spikes in volatility, the outlook on the IPO market will be harder to predict. Taking into account, turbulent trade relations between China and the U.S, Brexit, shifting Fed policies, IPO activity could remain muted going into next year. But with large tech companies like Uber, Lyft, Slack, Airbnb dropping hints of taking the listing plunge next year, if broader markets make a turn for the better, there could better news ahead.

Get a free deep dive into the overview of 2018 IPO market and find which IPO locations aree worth keeping an eye on.