MioTalk X Steven White: The Rise of the Chinese Wolves of FinTech

In this article, MioTech speaks with Professor Steven White at Tsinghua University on the drivers behind Mainland China leapfrogging developed markets to become a global FinTech innovator.

The rise of FinTech in China, while there are multiple reasons for it, I see three main attributes that have contributed to this significant growth:

The groundwork was already laid and disruptions in the financial space were ripe for the taking. Widespread Internet and mobile penetration fueled a massive domestic retail market, spurring the meteoric growth of E-commerce giants like Taobao, Tmall and JD.com as Chinese consumers rushed to shop online. Today, China has become the world’s largest and most developed retail e-commerce market, accounting for 47% of global digital retail sales.

Growth drove dominant tech players to provide more sophisticated solutions to further embed technology into consumers lives. Unlike the United States where companies are focused on a single service offering, Chinese companies were expanding and integrating multiple functions. This heralded the rise of financial solutions, many of which were subsidiaries focused on payments and third-party remittances.

"Unlike the United States where companies are focused on a single service offering, Chinese companies were expanding and integrating multiple functions. "

In 2004, Alibaba launched Alipay to facilitate transactions on Taobao and Tmall. Today, it is the largest online payment gateway in China, accounting for half of Chinese third-party online payments. 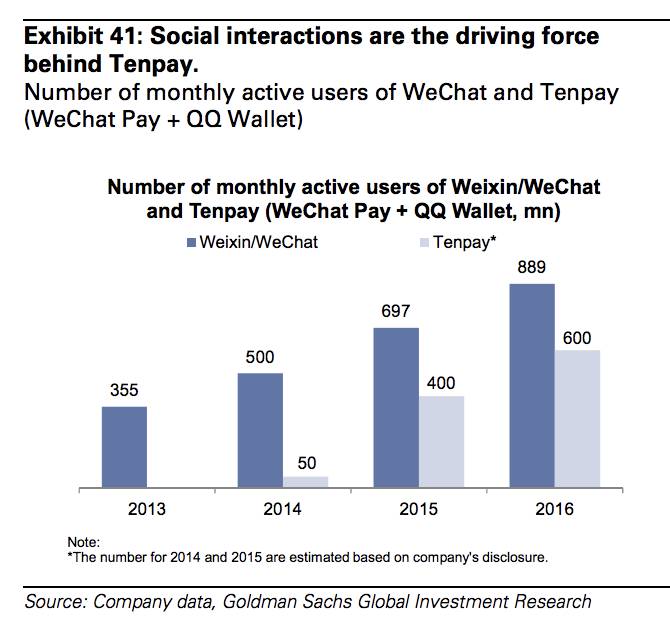 The other half is dominated by rival, Tencent, best known for its social media platform WeChat with 889 million active users and counting. The social media platform’s digital wallet burst into the scene with its ingenious tactics of gamifying cash. In 2014, WeChat launched “red packet” - which took China’s beloved traditional red envelopes filled with cash and turned it into digital money which users could use to give gifts, play games, triggering high levels of social interaction and customer acquisitions at almost zero cost.

The phenomenal success of e-commerce platforms signalled that Chinese consumers were more than ready to embrace financial solutions, creating opportunities for new players to disrupt the sector.

When it comes to the success of FinTech in China, a lesson can be learnt from this: being behind can be beautiful. Banking penetration in the Mainland was low. One in five of China’s adult population still remain unbanked. 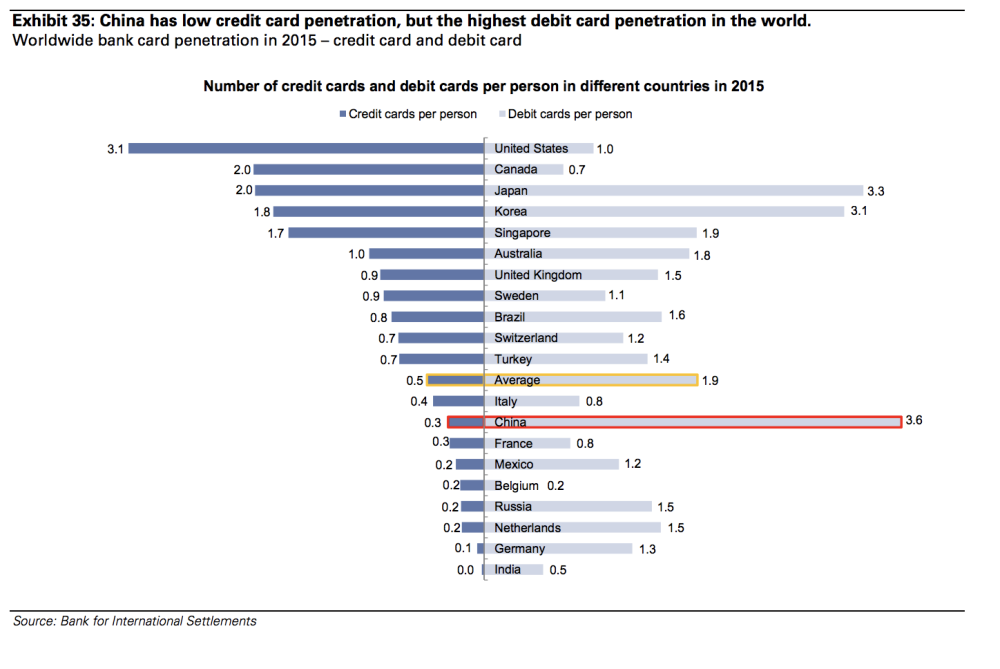 Unlike the U.K, U.S, Korea who were already moving towards card payments, China was still largely reliant on cash till the early 2000s. Only 1 out of 3 Chinese consumers own a credit card. But it is important to note that the average Chinese consumer had 3.6 debit cards. Since digital payments are linked with a bank card to work, the readily-available debit card infrastructure served as a catalyst for financial solutions to expand. Additionally, low penetration of credit cards meant there was a large untapped consumer in need of credit, setting the stage for FinTech solutions in the credit space. 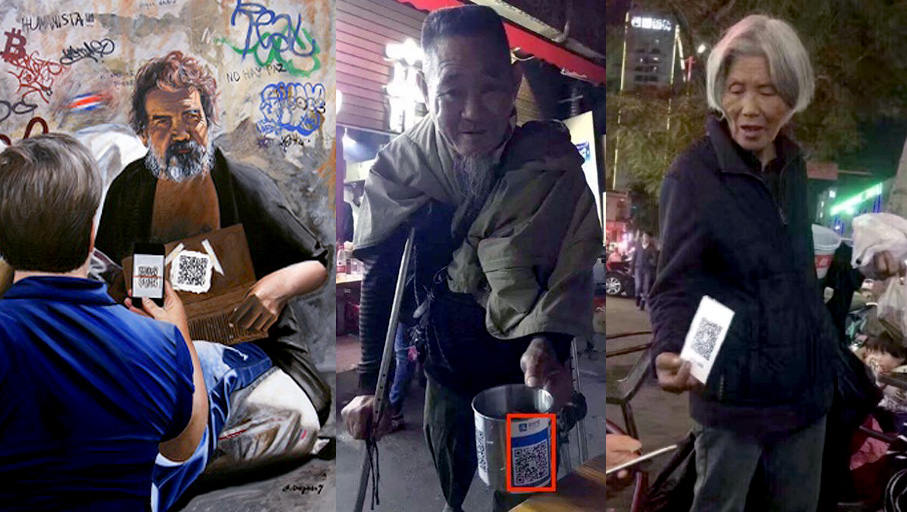 QR codes in China are so prevalent, even beggars are using it to increase their chances of securing “money".

Last but not least, China’s most dominant barcodes, QR codes. Coupled with a healthy mobile penetration rate, ease of use, low adoption costs and accessibility, QR codes took off like wildfire rendering physical wallets obsolete. Using a smartphone, a customer can pay merchants via their digital wallet by simply scanning the merchant's QR code. This is now a mainstay in retail shops, restaurants, street food stands, and even buskers on the streets.

"Coupled with a healthy mobile penetration rate, ease of use, low adoption costs and accessibility, QR codes took off like wildfire"

Being behind, meant unmet demands and/or poor banking services and that creates the opportunity for entrepreneurs to come in and leapfrog traditional incumbents. As Alipay and WeChat Pay dominate with digital wallets, many incumbents are starting to rethink their digital strategy, with many engaging third party solutions in order to stay relevant to their end consumers.

During the emergence of FinTech, regulations were largely structured around banks and traditional financial institutions that served mostly state-owned enterprises. As a result, SMEs and retail consumers were neglected, leaving a huge gap of untapped financial potential. Nimble and agile, FinTech startups were able to ride the internet and mobile phone boom, and jump into a fairly unregulated finance landscape, ultimately surpassing slow-moving incumbents during the digital wave of 2012 to 2015.

Moreover, as the Chinese economy evolved from an investment and SOE-led economy to a consumption and SME-led economy, the government threw its weight behind innovation and the development of inclusive finance to drive consumer spending and imposed far less regulatory constraints. This allowed for FinTech players a period of experimentation as they entered the market to bridge the structural imbalances by capitalizing on their strong digital presence.

"Chinese economy evolved from an investment and SOE-led economy to a consumption and SME-led economy, the government threw its weight behind innovation"

I believe this greatly benefited the FinTech sector in China. If you compare it to Hong Kong, which has a more sophisticated and developed regulatory environment, it’s lagged behind China due to its restrictiveness. If governments preemptively develop rules and regulations before a period of experimentation, penetration will be significantly slower with less creativity. 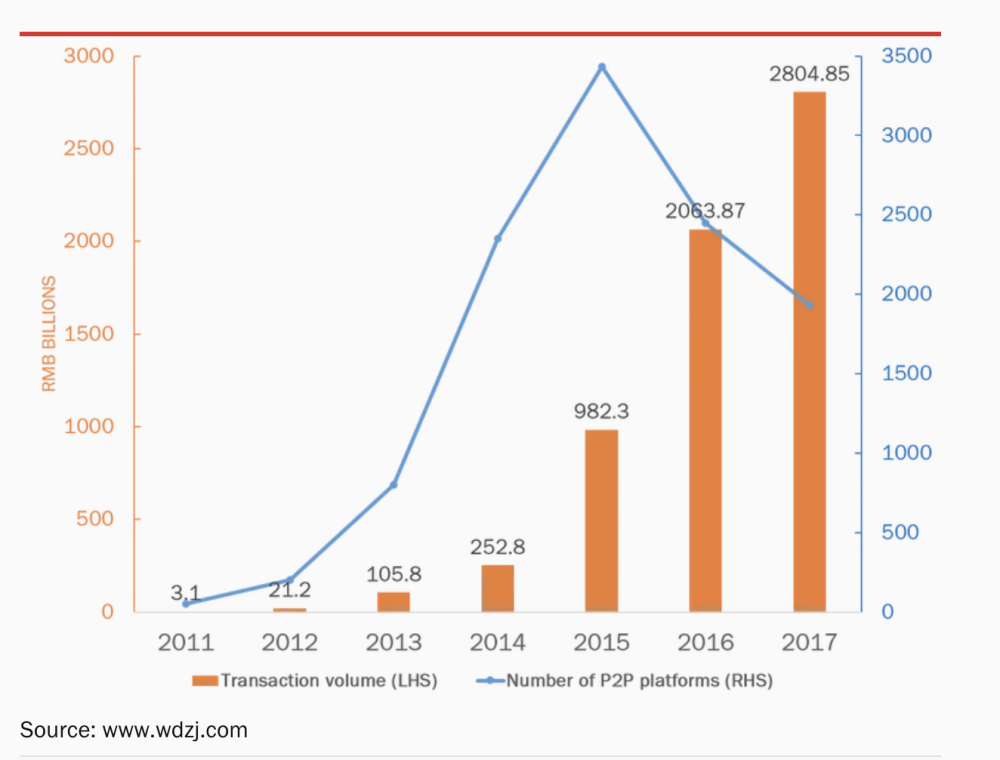 The total number of P2P online platforms took a sharp dip in 2016, even though the volume of transactions doubled in the same year.

But the absence of regulation gave rise to fraud and risky financial models. Ponzi schemes were rampant with data estimating that as of May 2017, over 60% of the 5,890 online P2P platforms that incorporated, folded.

The exploitation of an unregulated sector prompted government officials to introduce a more pronounced regulatory approach to FinTech. A comprehensive policy was laid out to all FinTech verticals spanning from lending, insurance, crowdfunding, payments to consumer finance.

Additionally, the government in the same year established a task force, the National Internet Finance Association, ran by the central bank and 400 members from the traditional finance and internet finance companies, to act as a regulatory body of all FinTech efforts and policies.

While stricter measures are in place, they are still relatively less restrictive as compared to developed economies like Singapore or the U.K. This signals the government's awareness of both the need for continued regulation but also the need to keep up with innovation and further expansion of FinTech startups in China which I believe is a more sustainable ecosystem.