Measuring Coronavirus Impact in China from the Sky

As the WHO declares the coronavirus a pandemic, the whole world is scrambling to cope with the social, political and economic mess, while China has stabilized over the past few weeks. The true color of China’s battle with the coronavirus is yet to be seen. Official data from China’s National Bureau of Statistics has put the Purchasing Managers’ Index (PMI) at 35.7 in February, a significant drop from 50.0 in January, and the lowest level recorded since the 2008 global financial crisis. The economic pain continues to pinch the country as people’s movements remain curbed and production lines struggle to get back on track.

Taking A Temperature of China’s Economy

With any urban landscape, you would find office buildings, factories and other facilities consuming energy and remitting heat into the environment. Remote sensing instruments today are able to provide data over large areas to derive useful statistics to detect urban changes and thermal patterns on the ground. By applying advanced AI algorithms on historical Thermal Infrared data, MioTech finds hidden patterns of heat consumption and detect abnormalities pre and post the epidemic unrest.

We utilized Landsat 8 and Terra Thermal Infrared Sensors to detect heat patterns in the Greater Bay Area, the major tech and manufacturing hub of China. Machine learning algorithms were adopted to eliminate noise from seasonality, meteorological conditions, and geological surfaces. We also used SWIR (Short-Wave Infrared) sensors to screen out unrelated surfaces by identifying materials. The cleansed dataset (including coordinates and heat level) is then run through a neural network based classifier to identify places that have significant economic activities in the Greater Bay Area. We use 8-day pixel by pixel thermal averages of three time frames in 2020, January 1 to January 8, February 18 to February 25, February 26 to March 4, to represent pre, during, and post-shock effects respectively.

Pre-coronavirus outbreak, as shown in Image 1, an average of 17.4% of the total land area in the Greater Bay Area releases heat in patterns that show economic activities (highlighted in red). 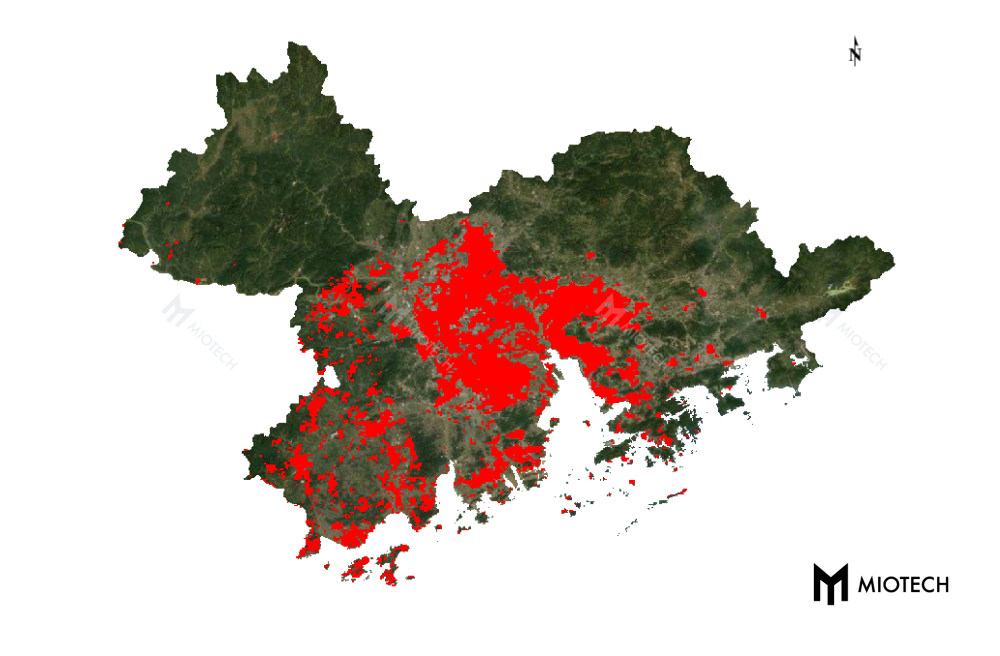 When quarantine measures first started to be removed, illustrated in Image 2 from 18th to 25th of February, only an average of 4.8% of the Greater Bay Area showed the heat patterns that indicate economic activities. This constitutes only 27.6% of the pre-shock normal size (4.8% divided by 17.4%). 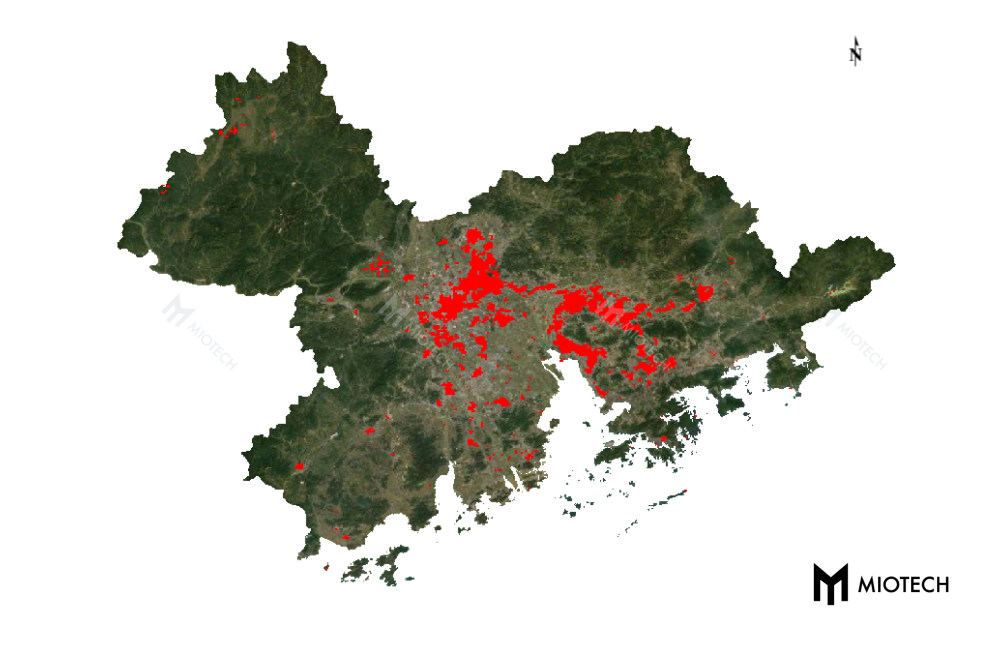 In Image 3 from February 26 to March 4, economic activities have largely resumed - an average of 14.9% of the Greater Bay Area has been consuming and releasing energy similar to the economic activities we detected before. Compared to the pre-virus number of 17.4%, this proxy measure indicates that work resumption rate was at 85.6% (14.9% divided by 17.4%). 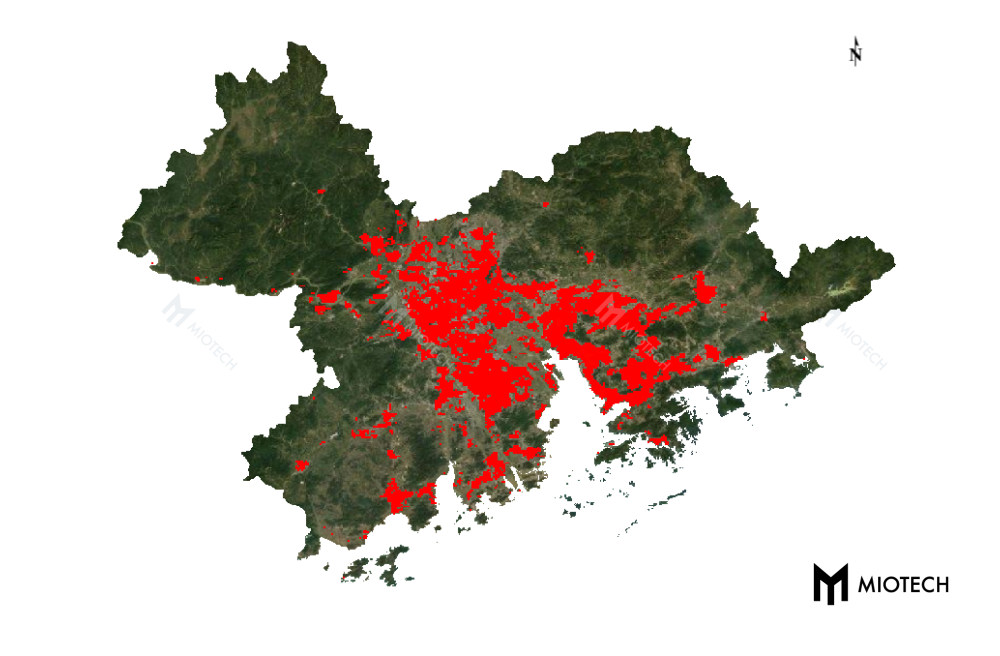 A Virus That Brings A Breeze of Fresh Air

Nitrogen Oxides are proxy indicators of economic activities as they are emitted from the burning of fuel. Vehicle exhaust, and the burning of coal, oil, diesel fuel, and natural gas, especially from electric power plants, are the largest sources. By tracking Nitrogen Dioxide density, MioTech can form a good understanding of not only the pollution but also energy consumption, all indicators on the health of the Chinese economy.

We used Sentinel-5P to identify the Nitrogen Dioxide density in the troposphere. The data and analyses are based on 20-day averages of two time frames in 2020, January 1 to January 20, and February 1 to February 20. 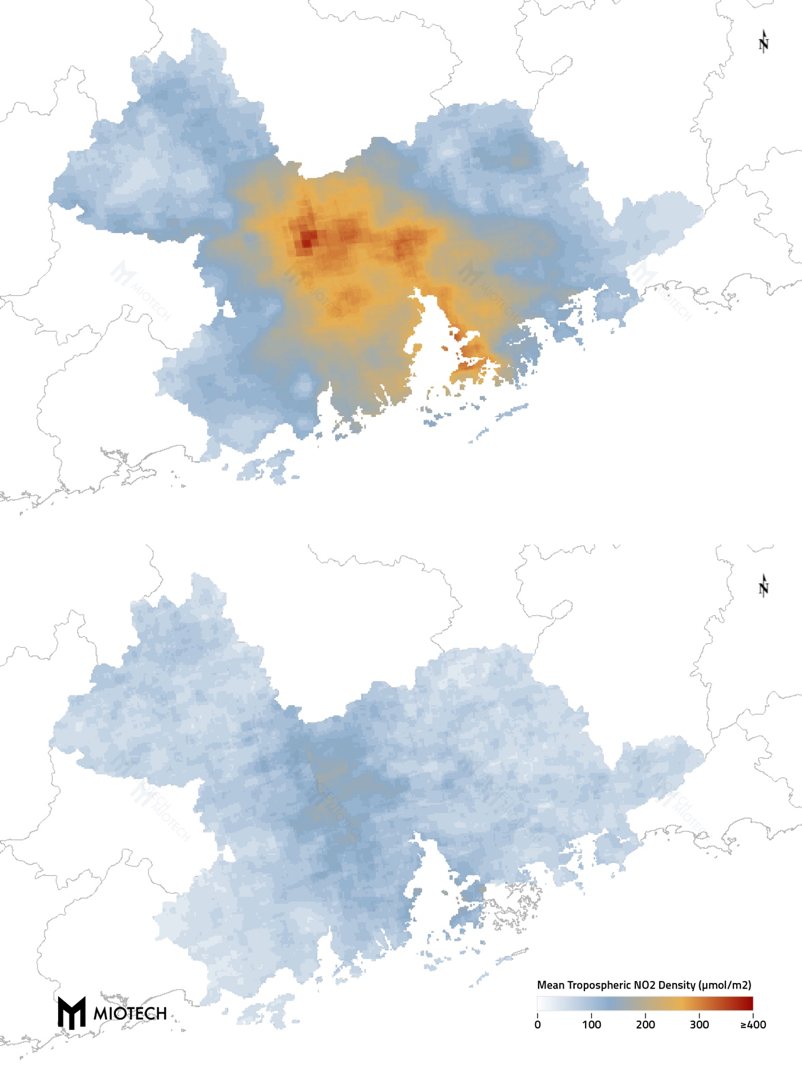 In the other manufacturing and business hub, the Yangtze River Delta, we find the similar contrast. From January 1 to January 20, an average of 10.12% of the area was covered by dense NO2. From February 1 to February 20, the size of the pollutant coverage decreased to a negligible 0.0097%. 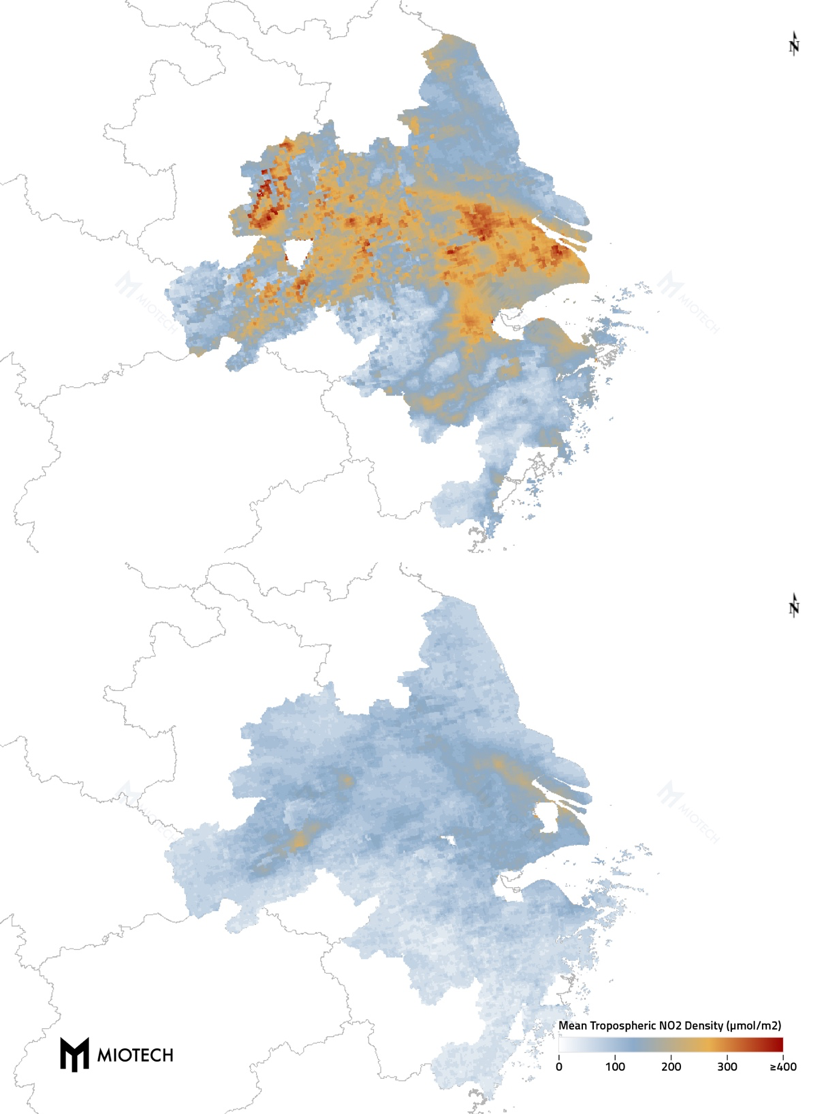 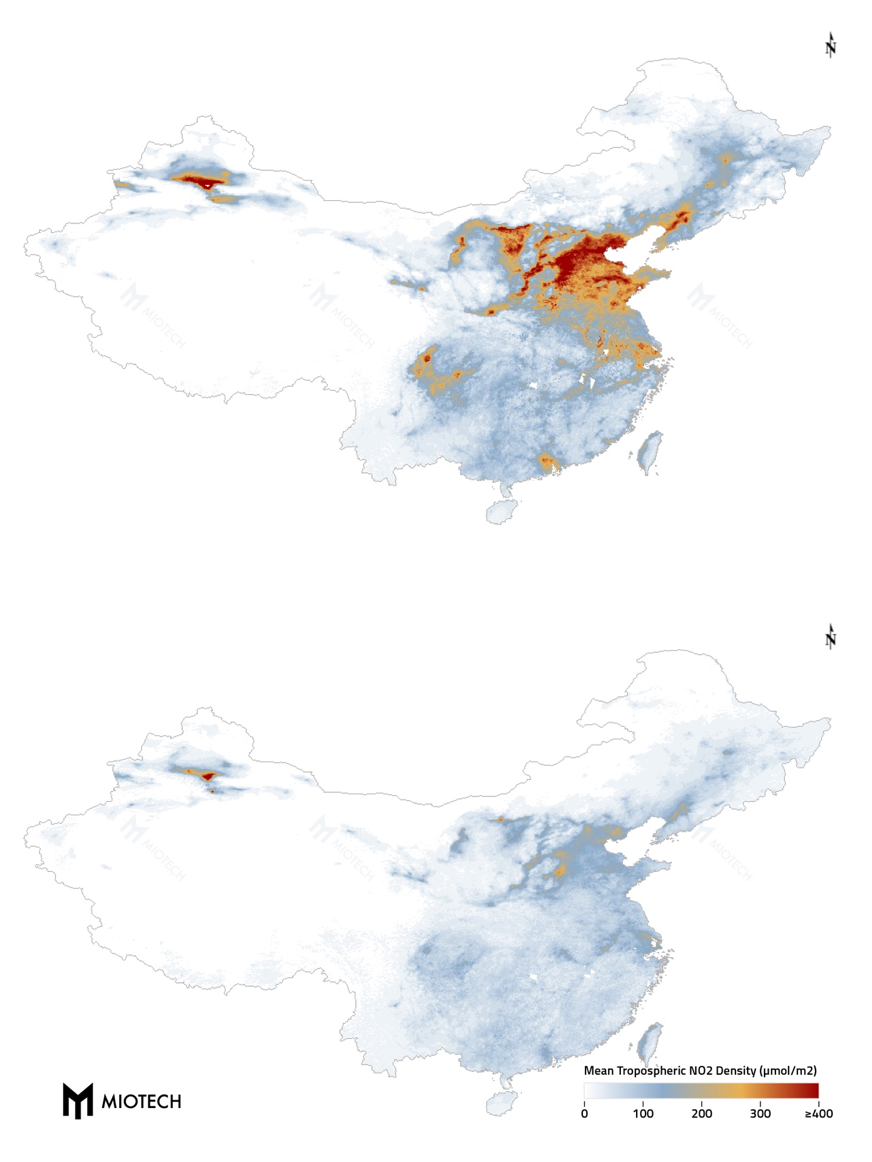 Amid signs of recovery, the coronavirus’ chilling effects continue to spread over the whole globe. Evidence from remote sensing shows the economic pain caused by the draconian measures imposed in China. As China gradually goes back to work, the speed of recovery will have implications to other parts of the world as well.